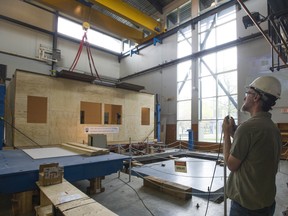 The province’s aging schools are suffering due to chronic underfunding for capital projects and upgrades are getting more expensive the longer they’re put off, the president of the B.C. School Trustees Association told an all-party government committee.

That revelation, critics say, flies in the face of Premier John Horgan’s statement earlier this month that there is “no constraint” on the province’s capital budget.

The committee is currently doing public consultation on the next provincial budget.

Broady told the committee that after canvassing all 60 school board chairs in the province, the 31 board chairs she spoke with said their “approved budgets have either, in some cases, contained substantial cuts or have structural deficits” that have forced them to dip into reserve cash.

These financial pressures are forcing school districts to make budget cuts “that directly impact the classroom,” she said.

On June 7, Horgan told reporters that “there is no constraint on our capital budget at this time.”

That was despite confirmation from the Ministry of Education that the government is delaying previously promised capital funding for seven projects — two new schools and five seismic upgrades of existing schools — because of the financial impacts of COVID-19 and last year’s catastrophic flooding.

One of the new school projects that has been deferred indefinitely is the $87 million project to replace Mission Senior Secondary, an NDP election promise in 2020.

Increased capital funding is needed for new schools, Broady said in her testimony, and projects that have yet to get underway are getting more expensive because of inflation. For example, in the Maple Ridge-Pitt Meadows school district, the estimated cost to build a new elementary school has ballooned to $50 million, up from $29 million in 2020.

“This is extremely concerning as the project is not yet approved or tendered,” Broady said.

Broady said the majority of B.C. public schools were built in the years after the Second World War and “have reached the end of their life cycle, which has led to increased maintenance costs.” Seismic upgrades are desperately needed to ensure schools are safe, she said.

Broady also said school districts face additional cost pressures related to the provincially mandated five days’ sick leave, a law that came into effect Jan. 1. Broady, who is also chairwoman of the West Vancouver school board, said that in her district the financial impact for the year “is expected to be in the range of $300,000.”

“The premier and the NDP government make a lot of announcements but when you look at what’s actually happening and what’s actually getting done, capital investment in new schools has been very, very low,” said Kirkpatrick.

“They’ve just done a small fraction of the schools in terms of seismic upgrading that needs to be done.”

There are 250 schools in B.C. that have yet to be upgraded for earthquake safety.

Education Minister Jennifer Whiteside wasn’t available for an interview Monday but said in a statement that the government “is making historic investments to ensure students are learning in modern, safe classrooms. We are delivering record investments in operating funding and capital projects, as we build and upgrade schools in support of an even more robust education system that helps students thrive. We are committed to ensuring B.C.’s school districts have the resources they need to meet the needs of students, no matter where they live.”

The 2022 B.C. budget included $3.1 billion over the next three years for new and expanded schools, seismic upgrades, maintenance, playgrounds and property purchases for future schools, the Education Ministry said in a statement. The government has also invested over $1.1 billion for school maintenance upgrades and new school buses since 2017, including $240.5 million this year to support school districts to maintain and improve their facilities.

Sign up to receive daily headline news from the Vancouver Sun, a division of Postmedia Network Inc.

Thanks for signing up!

A welcome email is on its way. If you don’t see it, please check your junk folder.

The next issue of Vancouver Sun Headline News will soon be in your inbox.

We encountered an issue signing you up. Please try again